First day to earn prizes in the Summer Reading Program. Two of three volunteers for the morning rush were new, but did a fantastic job. Another two volunteers had birthdays today, so they were subjected to me singing to them in the middle of the library.

Free lunches also began today (and sold out), and I actually remembered to bring a cooler for composting (the amount of vegetables they throw away drives me crazy). Then I left Cheryl alone with it all for two days and took a road trip with Grace! 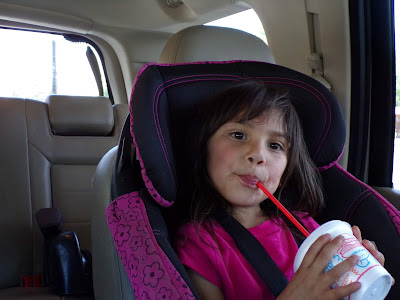 She's a pretty good little traveler! Four hours is a LONG time to be in the car, but we stopped for some Sonic, and saw some cool things along the way. 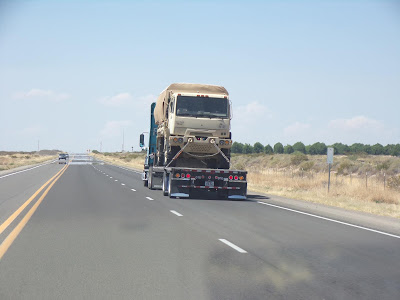 Grace thought it was pretty funny that the truck was carrying another truck. She also got excited every time we saw cows, which was pretty much every five miles.

We made a couple potty stops on the side of the road. One was by this tree, where Grace spotted the nest: 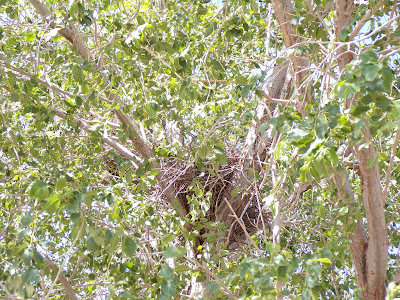 It was also full of noisy cicadas. I was looking for one to show her, and heard her say, "Look Mommy, ants!" Yep. Standing in the middle of an anthill. Just as I turned around, they started biting. Had to strip her down and smear cortisone (just when you think you have overpacked...)

She recovered pretty quickly, though, and was excited about the hotel room! Me, a little less so. We had to go back to the front desk to get batteries for the remote and a light bulb for the lamp. I'll leave the sticky stuff on the TV for someone else to deal with. And the phone falls apart when you answer it. The only ice machine was broken, so we ran across the street to a gas station. We had packed ham and fruit and veggies, so we just had a picnic lunch in the hotel room and watched TV - which confused Grace, because we haven't had cable since before she was born. I have to say, we aren't missing much. She actually asked me to turn it off after a little bit of Donald Duck!

Oh, and the security lock on the door. 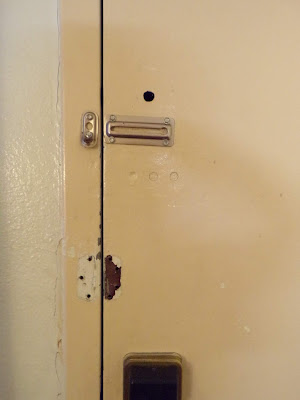 Why yes, I am armed, funny you should ask.

Nobody slit our throats in the night, and we weren't eaten by bedbugs - although Grace's bed smelled iffy, and when I stripped mine I discovered black flecks on the sheet (not bugs - no ides what). (I always strip the beds when I leave and sort into colored piles - partly to make it easier for housekeeping, and partly to make sure they are changed for the next guests!) And the shower ONLY had hot water, so that was a quick one. Coffee pot leaked. Free breakfast was cereal flakes, toast, muffins and waffles. Edible at least. We killed time in the breakfast room before heading to Grace's appointment, which was only seven minutes away.

Grace was having a good day - for her that means listening and cooperating and speaking so she could be understood - but the doctors saw mostly the same things we do at home and school, which is a good thing! One test had her trying to repeat back specific words, and they remarked that there was one word she remembered consistently. I had to laugh when I saw what it was - cows! (What did we see all day yesterday?!)

She received a couple specific diagnoses and recommendations that will be added to her IEP this fall, and hopefully help her get more specific services. If you have ever played the special ed game, you know labels can be a good thing - sometimes you need them to force the services that everyone knws perfectly well the child needs. The UNM doctors were fantastic!

When we broke for lunch we found a nice shady park on Lohman and just hung out for an hour. Grace had received this cool pink PURSE from the doctor (if you know Grace, you know that was perfect) which contained a mermaid doll that matched her shirt! 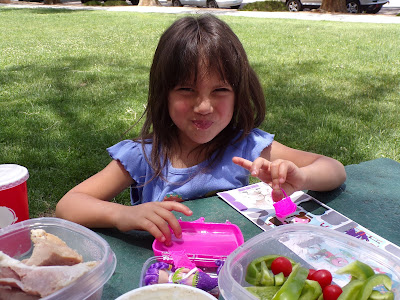 Back to the doctor's for the final consult, then the looooong trip home. Only one minor melt-down from Grace, and I can't really blame her! She was a super traveler overall!

We crossed the Rio Grand both ways. 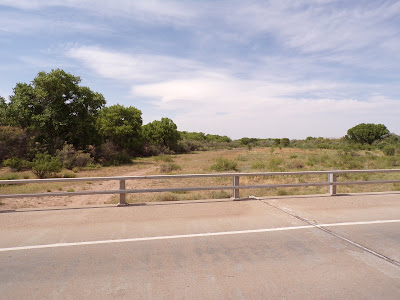 A little rain would be nice, is what I'm saying.

Got in to work early to catch up on what I had missed. More than fifty new kids registered for summer reading, and we didn't even have any programs! I also had a cart full of new books (yay!) so I spent most of the rest of the day getting those ready to go out.

I bought a couple puzzles to go along with the music theme, and I put the first one out on a table today. I don't know if my patrons will be interested, but it quickly became the spot to find staff members during their break. You can't do just ONE piece!

And the ants have eaten pretty much everthing in my flower garden. Peppermint oil was a bust, trying cinnamon. 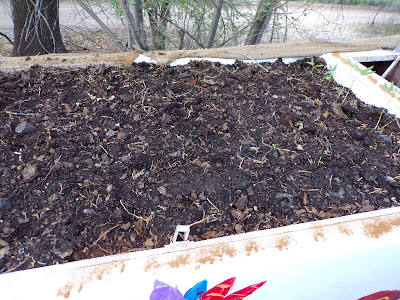 Normally my late day to go in, but I needed to make up for being gone. On the way I raided trash cans behind businesses for empty boxes: 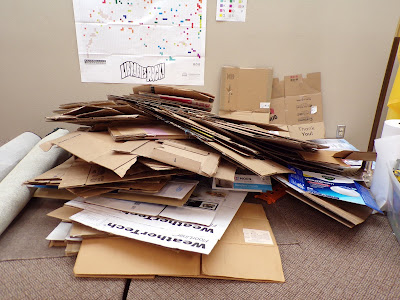 then I put my volunteers to work taping them all back together!

Builder's Club today! Our first SRP program. I had set the room inside up last night, with the Legos, Duplos, blocks and Lincoln Logs. As we got close to opening time, I started chucking the boxes outside: 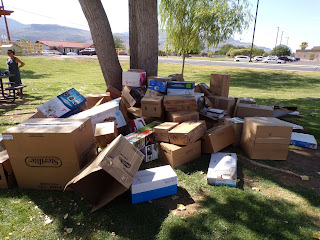 The first kids arrived half an hour before we were set to begin, but I saw no reason to make them wait. 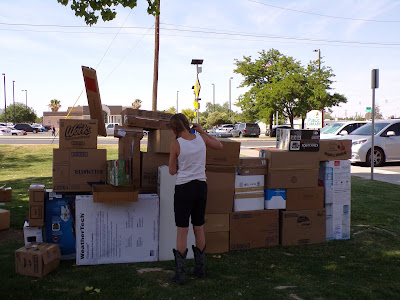 They said no grown-ups - not even me! Hmph. And after they got all four sides up, this little cherub walked up, studied it for a moment, then put both hands out and shoved it over. 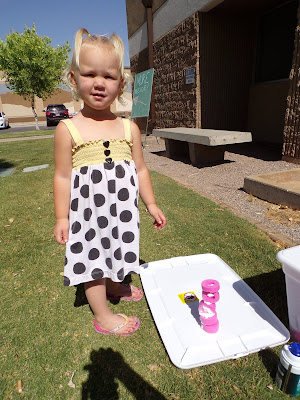 She left them to rebuild, and went back to her favorite, pool noodle slices and shaving cream!

I already had the pool noodle slices from other projects: 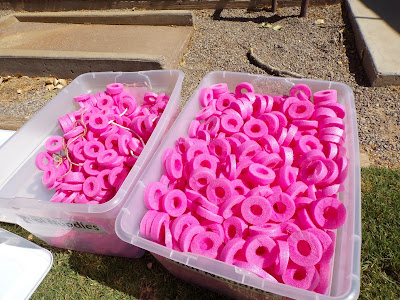 And, of course, I already had shaving cream! Doesn't every librarian? This was a great activity I heard about from someone at Explora. 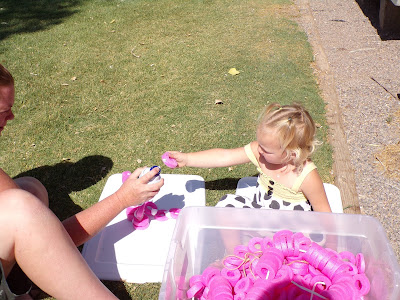 Just a little dab of shaving cream and they stick together in all sorts of formations! I asked the moms to help their littlest ones, and reminded the kids whenever I walked by to keep it away from their faces, but they all did a super job with it. Of course, after a bit the shaving cream became the main focus, and rather than towers we ended up with creamy pies of sorts. Sensory play, it's all good! And took just a few seconds to rinse away. Several parents added the materials to their shopping lists right on the spot, so they could do it again at home.

The program finished around time for lunch, which sold out again. My camera battery died after those few pictures, but there were at least 140 people there. Hard to count when they are all running every which way! The kids were really having a ball with the boxes, building things, making robot arms, and flattening them to slide down our tiny hill, so I didn't start breaking them down until everyone was gone - about 2PM. This might be a good time to mention that it was 102 degrees today. I did manage to fit every one in my car after removing the car seats, but had to hit two different recycling centers to get rid of them all. Then tossed back some ice cream and a lot of bottled water before setting the room up for tomorrow's program.

At home in the evening we watched a VERY old DVD about Sweden, the country we are studying right now. Note to self: ask person who orders AV to update our travel videos. Those new-fangled cameras they manufactre are pretty spiffy - and about the size of my toaster. Logan has decided he wants to join the Sami and herd reindeer. I can see that!

Tomorrow is my day off...camping with the Navigators. Who needs sleep, right?

Email ThisBlogThis!Share to TwitterShare to FacebookShare to Pinterest
Labels: At the Library, summer reading