Today is Brought to You by the Letter A!

Very, very beginning letter studies with Shane and Grace! Once a week Grace's teacher sends home worksheets for her to trace letters. Gosh, that's exciting. And, seriously, homework for preschool?? (No, we don't do them.)

It seems a bit counter-intuitive to have a child with fine motor issues trying to trace letters she can't identify, so we are starting with just recognizing letters - no sounds, no writing, that can come when they are ready. Shane already knows some of his letters, while Grace just guesses "G" for each one (it is the most important after all!), so we are starting at the beginning. These are just some fun activities we did to help cement that first letter in our heads:

These are free printables found at totschool.shannons.org 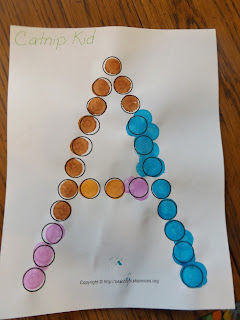 She has all sorts of fun activities, and you have to love her tagline: "Because I can't handle another episode of Barney." There aren't any posts from the past few years - I hope that doesn't mean Barney came calling - but she still has her old posts up to explore. It occurred to me recently that we haven't used our dot markers in a while, so this was a great way to introduce the letter and practice motor control.

Anything with foamy shapes is a win. I just opened the tub and challenged them to see how many As they could find. 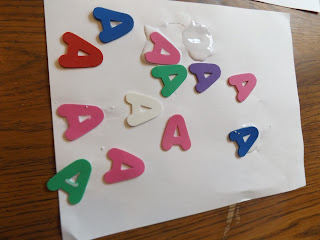 Grace is an all-or-nothing kind of gluer. Some got barely a dot, while others...

While they were working, I did a Google image search for "letter a", and printed out a few pages of results. I cut them into strips and told them to pick out the ones they wanted to cut out and glue on another paper. 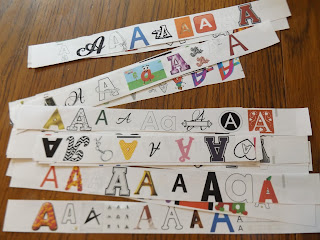 The choice seemed to be "all of them", which was great! They are both doing a super job with scissors, and Grace kept running to me to show me "I cut in the lines!" 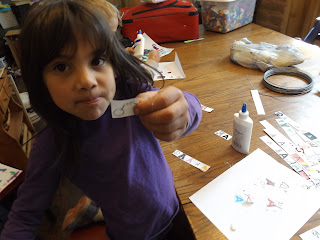 They had so much fun, they both wanted to do multiple pages, so I told them to get more paper out of the art drawer. Somebody apparently had already used this one. 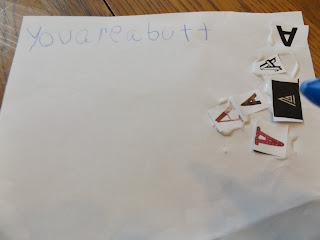 Shane refused to cover it up.

I printed out several "A" coloring pages and we did different things with them. This one was supposed to be colored in one color per space, but they decided at this point they weren't doing what the teacher told them to: 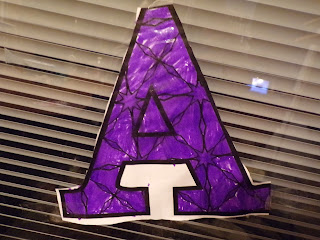 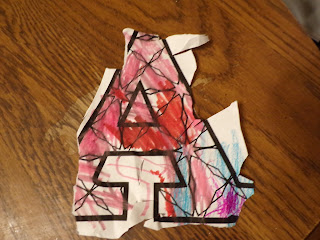 Sheridan helped Shane cut out his (purple) one, while Gracie did her own. Her scissor skills are actually coming along, not too long ago she would have cut right through the middle!

That pretty much signaled we were done for the day, but we will continue later by coloring the other A's in different ways - painting, thumbprints, and gluing cereal on them. Next up: snack time with Scrabble crackers, during which we will eat all the "A"s we can find!