Review - Miracle Man: the Story of Jesus, by John Hendrix

This is, to state the obvious, the story of Jesus, from the calling of Simon Peter to the resurrection. Up until the very last page, however, He is just called Miracle Man, or simply, the Man. In his author's note, Hendrix explains that he wanted to present the story free from "the trappings of religion around it", in an attempt to help readers see the story as if it was unfolding in front of them - as if they did not already know who this Miracle Man was, and what the rest of His story would be.

While I respect the idea, it didn't quite work that way for me. I think in order to bring the reader to that place, we would need to see and feel more of what the people around him were seeing and feeling, and that just didn't happen. The bare bones of the stories kept them from pulling the reader in very far before it was on to the next event.

On the other hand, I grew up knowing these stories, and there are many children (and adults) these days who did not. For a reader who is not familiar with the Gospels, using this book as an introduction might accomplish just what Hendrix is going for. Either way, it is an attractive accounting, and will find its place on our shelves.

One note about the illustrations: I chiefly liked them, and I generally like seeing changes in fonts, but some of these became confusing. For example, twice when reading it I missed the buildings saying "Rise and Walk", and the text made no sense until I went back. Maybe a younger reader would catch that more easily (or at least not miss it TWICE like I did!)

Want to give this as a gift? Do a search on Amazon for Bible story action figures to go along with it! I found these, featuring one of the stories mentioned in Miracle Man: 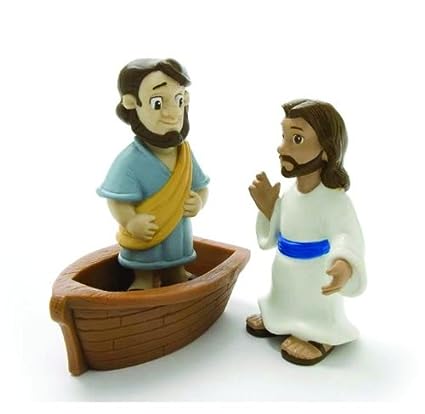 Most of the 'cooler' looking (i.e. not just for little kids) figures seem to be centered around the Old Testament, which can also be a lot of fun and inspire more reading.

***This book has been nominated for the Cybils Awards, and I am a first-round panelist in this category. There are many other panelists, and many MANY other great nominees, so a good or bad review here does not necessarily predict placement on the shortlist.