A friend who gets food once a month from a local food bank mentioned a while back that they always get a few jars of jalapenos, and she can't do spicy foods. My kids don't do much spice either, but I said I would take them and see if I could 'do something' with them. I didn't have time just then, so I put the jars she gave me in the pantry. As well as the jars she gave me the next month. And the next month. This past weekend, I was straightening out the pantry and realized.. 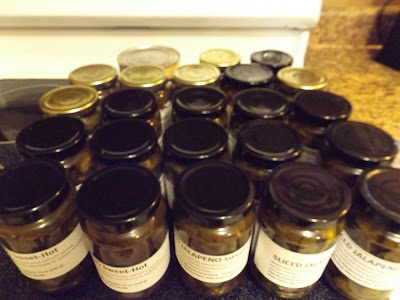 it was time to actually do something with them!

That's 22 jars and one stray can. That's a lot of nachos. I needed some other ideas.

Last year I made jalapeno jam with some fresh jalapenos, and gave it away for Christmas. Yummy on cream cheese and crackers! I wondered if canned jalapenos could be used the same way, so I started searching for recipes. Mostly I found recipes for jalapeno jelly, with someone in the comments asking the same question I had! Time to start experimenting.

I looked at the ingredients list, and as I thought, there was a lot of water, so I decided to drain them well first. Then I tossed them in the blender and chopped them up nice and fine.

These were labeled "hot and sweet", and a quick taste test told me they weren't lying on either part. Most recipes would call for a ton of sugar for this much pepper, but I just added a cup of sugar and a cup of honey. I also decided not to add vinegar, since that was already an ingredient in the jars. Yes, I had drained them, but they had obviously soaked a lot up. So, basically, the canned (drained) peppers, sugar, and honey. Bring to a boil, then cook and stir for ten minutes.

It really bubbled and popped at this point, so I put a lid partway over my pot, and actually put a glove on the hand I was using to stir! Before I did that, a small amount popped out and landed on my thumb, and I automatically licked it off. HOTHOTHOTHOTHOTHOTHOT!!! But yummy:)

I added three packets of low-sugar pectin, cooked for five minutes more, and then canned. It made about 12 pints, although I put most of it in half-pint jars. 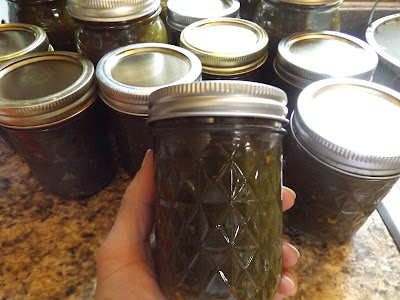 It looks a lot like salsa verde, but is definitely set like jam. Of course, we have to taste test, so let's break out the Ritz...

Yum!! Enough bite to make Daddy happy, not so much I couldn't stand it. The cream cheese really brings out the flavor, so you don't just taste hot.

Verdict: canned peppers will work just fine. If you want it to be more jelly-like, you could add juice to the peppers and reduce it a bit. Apple or cranberry might add interesting flavors. These will appear in a few Christmas baskets this December - if they last that long! This seems to be our new bedtime snack!

Email ThisBlogThis!Share to TwitterShare to FacebookShare to Pinterest
Labels: In the Kitchen, Jalapeno Jam, recipes